I came across this photo gallery by Won Kim of Tokyo residents living in what he describes as a downscale Capsule Hotel. Won Kim – Enclosed:Living Small

The Japanese are well-known for making efficient use of small living areas, a necessity of their high population density. I myself often find the womb-like qualities of these spaces comforting, not confining. This feeling is what led me to the subject of these portraits, which show the residents of what is best described as a guesthouse for backpackers in Tokyo. The facility is a sort of downscale version of the well-known “capsule hotels” often used by Japanese businessmen for short-term stays.

One of several such facilities in the city, this diminutive, bare-bones hotel takes up one floor of an office building. It is composed of a few hallways, along which the proprietor has built tiny living compartments, perhaps no larger than XX x XX feet, none with enough headroom to stand up straight inside. Separated only by unfinished plywood, the spaces have no windows or door, only a curtain at the entrance for privacy. 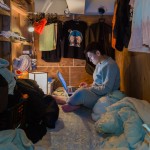 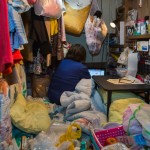 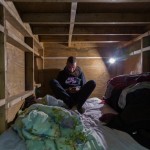 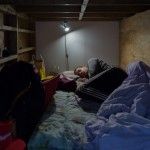 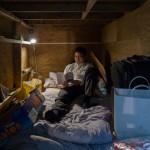 I relate with him finding the small space being comforting. I could sleep/live in one of those spaces. I wouldn’t call it “living” but more of a safe place to sleep and store my valuables when I don’t need them.

I’ve slept in many small and large vehicles. I’ve a Mitsubishi Eclipse, my Suburban, my parents truck for camping as a kid, an RV.

The problem with these capsule hotels for me is that the loving wife wouldn’t like it. The 12 year old would find it as a fun adventure. The appeal to me is to get rid of all possessions that I don’t need for daily life and store keepsakes. Then move to one of these that could be close to a “job”

I think the idea of these could also help our homeless people in the US. Specifically in OC/LA where I live. Think of all the unused commercial space that could be turned into little safe places for people who are either struggling to get back on there feet and need a safe place to sleep while looking for a new job or place to live.

Would you “live” in one of these temporarily?

The one bullshit problem with doing anything like this are the housing rules in California and other states/counties/etc. Almost every city/county/state has rules on the minimum size of a “dwelling”. What crap that is.

Another great post I found is from Jeff Reiffman – How Our Success is Ruining Seattle. It really has nothing to do with living in a wood box in Tokyo. But it makes me think about how housing is fucked for a lot of people.