This past Sunday I and my 13yr old went to Six Flags Magic Mountain (Valencia, CA).

We got to go on 10 total different rides and 2 of them we went on twice in span of 6-ish hours.

I haven’t been to Six Flags in prob 20 years and this is the boy’s first time. I was expecting lines but shit not like that.

So I decide to splurge and go check out the Flash Pass. 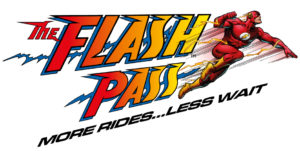 There are 3 price options

I went All Out!

What we went on:
(Starred rides mean that only 1 ride was available for the day. Couldn’t go twice.)

Lines were horrible, didn’t even try to eat. So we each had 2 icecream bars and a bag of chips and drank water at the fountains.

We had a good time. Bummed we couldn’t do Riddler’s Revenge as it was closed. There was not enough time in the day to do more rides.

Was it worth it? Mostly
Would I do it again this year? Hell no not for that cost

I’m just boggled at the prices of Amusement parks these days. More so the price for a regular ticket and have to wait in those lines.

It was nice splurging and basically having no wait for any ride. At first I wanted to say that it was not worth the cost, but the more I think about this it made the experience worth it. Maybe go again on a day with longer hours to really get more use out of the Flash Pass.